Named in honour of eminent scientist, Old Boy of The Scots College, and inventor of the bionic ear, Professor Graeme Clark AC, the Clark Lecture Series aims to inspire the best of thinking about faith, learning and leadership by bringing to Sydney the world’s finest scholars.

The inaugural Lectures in 2014 were delivered by distinguished theologian and public commentator Professor John Stackhouse, formerly of Regent College, Vancouver, on the theme of ‘Faith and the Intellectual Quest in the 21st Century’. The public lectures are accompanied by the two-day Ethos Conference at St Andrew’s College within the University of Sydney, which gathers bright students, teachers and academics to explore the intersection of faith, learning and leadership. The Clark Lecture Series makes a significant contribution to the understanding of education, formation and the common good in Australia and is a flagship initiative of The Scots College.

More information about The Clark Lecture Series can be found at www.clarklectures.org 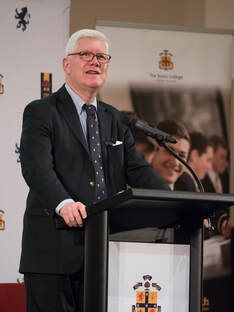 In our current day and age the amount voices influencing the thoughts, ideas, and practices of civil society is influencing dramatically the character development of all people. Attempts to comprehend divergent, relative thinking embedded in 21st Century practices has witnessed a shift away from a common philosophical and religious consensus despite the growing challenges that face contemporary society. Subsequently, the ideas of ancient, modern, and contemporary thinkers have created a mosaic of opinions regarding what is considered reasonable, common, and just in the way of personal and social morality. Such complexities have clouded society's ability to re-imagine their contribution to and for the common good.

Leading Philosopher Professor John Haldane was welcomed as the 2018 Distinguished Professorial Fellow Professor as he explored  the ramifications of such realities and highlight the various modalities in which we are called to serve that which is common and good. At the Clark Lecture, Professor Haldane gave a masterful analysis of the way in which the terms ‘character’ and ‘the common good’ are often imprecisely used, and the importance of having a robust understanding of them if we are to form young people as future leaders. He challenged the audience with several historical and contemporary examples, while also signalling a hopeful vision of the future through continued attention to the vital work of developing character.

A proponent of analytical approaches to the philosophy of Thomas Aquinas, Professor Haldane has authored or edited dozens of articles and books, including "An Intelligent Person's Guide to Religion", "Faithful Reason: Essays Catholic and Philosophical", "Reasonable Faith", and "Atheism and Theism". He has also appeared on several BBC radio and television programs and contributed to the Times, the Daily Telegraph, The Scotsman, and several other outlets.

Professor John Haldane has well over 200 publications that deal with subjects such as Art and Aesthetics, Education, Ethics, the History of Philosophy, the Philosophy of the Mind, Epistemology and Metaphysics, Political and Social Philosophy, Philosophy of Religion, and Theology. 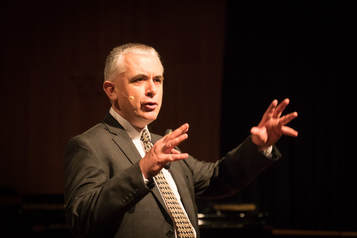 2017: The World We Think We Live In: Schooling and Christian Imagination
with Professor David I. Smith
Director of Kuyers Institute for Christian Teaching and Learning, Director of Graduate Studies in Education, Calvin College, USA

At this moment in cultural history most of us are quite aware of being part of a material world of economic forces and neural processes that constrain who we can become. Yet the world we think we live in – the ways in which we interpret our surroundings, the expectations we have of others, our dreams, fears, hopes, and regrets – also plays a major role in guiding our choices and trajectories. This “social imaginary,” our shared way of imagining what we are doing and why, shapes the way we think of schooling and is in turn shaped in part by our experiences of schooling. This complicates discussions of religion and education, suggesting that they cannot be reduced to arguing about whether and when religion should be mentioned in school.

Eminent Professor David I. Smith was welcomed as the 2017 Distinguished Professorial Fellow Professor by the Scots College, as he sought to explore the interaction between faith and imagination. He also demonstrated the increasingly materialist and utilitarian themes in language textbooks since the Enlightenment and challenged teachers and school leaders to rethink the habits in our classrooms and in our school life to better orient them towards the formation of character, service and a vision for human flourishing.
​
David Smith has an international reputation as a thinker and practitioner at the intersection of faith and teaching. He is the founding Director of the Kuyers Institute for Christian Teaching and Learning and Director of Graduate Studies in Education at Calvin College, in Grand Rapids, Michigan.

After undergraduate studies at the University of Oxford, Professor Smith began his career teaching French, German, and Russian in public secondary schools in the United Kingdom, where he became fascinated by the question of how our beliefs, values, and commitments can shape and guide our approaches to teaching and learning. After graduate work in philosophical theology, philosophy of education, and curriculum studies he moved to Calvin College, where he has received the College’s Award for Innovative Teaching. He is the Senior Editor of the Journal of Education and Christian Belief, and has served on the Values Education Council of the United Kingdom.
​
His original questions – how does my identity as a Christian affect how I teach? What other values and convictions are implicitly embedded in our actions as teachers? – have continued to guide his work. He has spent more than two decades exploring the implications of rethinking the language classroom in terms of hospitality to strangers and investigating the wider relationship between pedagogy and spiritual and moral formation. In recent years he has traveled widely as a speaker and consultant to schools, universities, and conferences in North America, Europe, Asia, Australia, and Africa. His books include, among others, Learning from the Stranger: Christian Faith and Cultural Diversity, and Teaching and Christian Practices: Reshaping Faith and Learning. 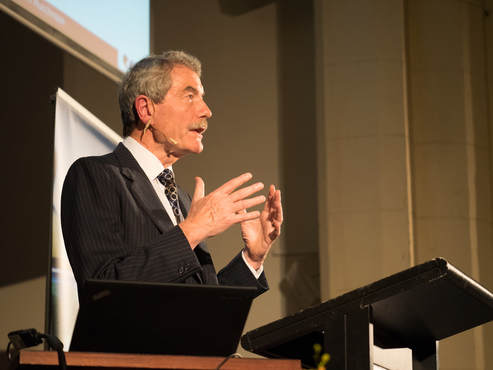 2016: Faith and Fusion - An MIT Physicist Explores Science and the Sources of Truth
with Professor Ian Hutchinson
Professor of Nuclear Science and Engineering, MIT (Massachusetts Institute of Technology), USA

Do faith and science fuse? Are they forever at odds, or can they both be sources of truth? Exploring these and other essential questions about knowledge, science and faith, the 2016 Clark Lectures featured eminent plasma physicist Professor Ian Hutchinson from the Massachusetts Institute of Technology (MIT) as the 2016 Distinguished Professorial Fellow Professor. Surveying history, philosophy and contemporary science, he pointed to the religiously-inspired origins of science and the practice of modern scientists like him as strong reasons to view this clash as a myth. He answered a number of tough questions on nuclear fusion research, Genesis and the origins of the universe, and the relationship between science, relativism and truth.

While in Sydney, Professor Hutchinson also spoke in a range of other settings, including:
Professor Ian Hutchinson works at the cutting edge of nuclear fusion and plasma physics, harnessing the power of the sun and stars to generate new energy sources. He and his MIT team designed, built and operate the Alcator C-Mod tokamak confinement device, an international experimental facility whose plasma temperatures reach beyond 50 million degrees Celsius, and are prototypical of a future fusion reactor. He directed the Alcator project from 1987 to 2003 and served as head of MIT’s nuclear science and engineering department from 2003 to 2009. He is the author of over 200 journal articles and the classic work on measuring plasmas, Principles of Plasma Physics. Becoming a Christian while an undergraduate at Cambridge, Professor Hutchinson has written and lectured extensively on the relationship between science and the Christian faith for The Veritas Forum on America’s leading universities, and is the author of the 2011 book Monopolizing Knowledge: A scientist refutes religion-denying reason-destroying scientism. 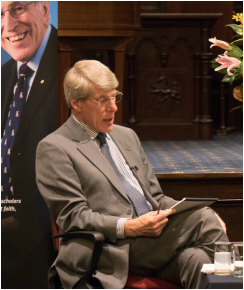 2015: Truth and Tradition in a Fractured World: Education the whole person, past and present
with Professor David Bebbington
Professor of History, The University of Stirling, UK

Educational institutions in Australia like The Scots College were founded with a vision for forming holistic young men in ancient truths and traditions. Almost 125 years later, our culture doubts the reality of truth and questions the utility of traditions. What place might they have in educating the whole person in the fractured world of the twenty-first century?

Exploring these key questions and modelling the best of thinking about faith, learning and leadership, The Scots College was delighted to welcome as its 2015 Distinguished Professorial Fellow Professor David Bebbington.

Professor David William Bebbington – one of the most influential historians working today – is widely acknowledged as a world authority on religious history. He is also recognised for having devised the Bebbington Quadrilateral as the standard definition of evangelicalism, one of the most important global religious movements of the twenty-first century.

He has written or edited seventeen books, most notably Patterns in History (1979); Evangelicalism in Modern Britain: A History from the 1730s to the 1980s (1989); Victorian Nonconformity (1992); The Mind of Gladstone: Religion, Homer and Politics (2004); Baptists through the Centuries: A History of a Global People (2010); and, most recently, with Oxford University Press, Victorian Religious Revivals: Culture and Piety in Local and Global Contexts (2012). He has delivered a number of notable public lectures, most recently the Hughey Lectures at the International Baptist Theological Seminary, Prague (2008), the Friends of Dr Williams's Library, London, Lecture (2010) and the Moule Lecture at Ridley Hall, Cambridge (2012).

For recordings of Professor Bebbington's many addresses while in Sydney, please click here. 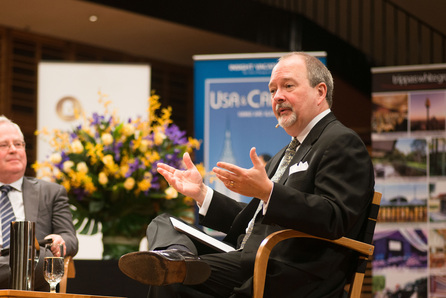 2014: Into a Far Country: Faith and the Intellectual Quest in the 21st Century
with Professor John G. Stackhouse, Jr.
Sangwoo Youtong Chee Chair of Theology and Culture at Regent College, Vancouver

The inaugural Scots Distinguished Fellow for 2014 was Professor John G. Stackhouse, Jr. who holds the Sangwoo Youtong Chee Chair of Theology and Culture at Regent College, Vancouver. Professor Stackhouse is one of Canada's leading public intellectuals and one of the world’s most sought-after writers and speakers on the intersection of Christian faith and public culture. The author of 8 books, including Need to Know: Vocation as the Heart of Christian Epistemology (Oxford, 2014), Can God Be Trusted? Faith and the Challenge of Evil (IVP, 2009) and Humble Apologetics (Oxford, 2006), as well as over 600 articles, he engages with a wide range of audiences, from CEOs to churches, musicians to major media outlets such as The New York Times, Time, ABC News and CBC Radio. He has lectured at the world's leading universities including Harvard, Yale, Stanford, Edinburgh and Fudan.

'You're Not Going to Heaven,
and That's a Good Thing Too'
Evening public lecture, Thursday 14 August 2014
Coote Theatre, The Scots College
(Video here)

Irreducible Complexity: Why We Need to Think Hard
The World is Not Enough: Lessons on Mission from James Bond & Jesus Christ
Wednesday 13 - Thursday 14 August 2014
St Andrew's College, Carillon Rd, The University of Sydney

Professor Stackhouse also made a number of contributions to debates in the media over knowledge, education and religion, featuring on ABC TV's Q&A, in The Australian, Radio 2GB and 2UE, Hope 103.2 and Radio National.