In 2012, Scots initiated an ongoing program to research the efficacy of teaching strategies. The five Academic Deans were at the fore of this initiative. Action Learning Initiatives (ALI) are projects conducted by teaching staff to introduce and evaluate new learning strategies and programs. There are a number of ALIs underway across the College.

The following projects are just some of the exciting initiatives taken by staff at The Scots College to further refine their educational practice.

Why do men teach? 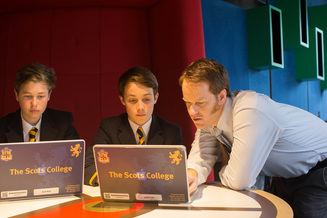 The Scots College is fortunate to have many male teachers in a profession in which men are becoming rare. Over the last two decades, the number of men in NSW public schools has fallen sharply. Today 39.8% of secondary teachers and a paltry 16% of primary teachers are men. Having positive male role models who champion not only traditional male values but also academics and the arts is essential. Scots is well placed to become a strong advocate for male teachers and to inspire young men to enter the profession.

But what motivates men to become teachers in a profession that is becoming increasingly a woman’s domain? This question formed the basis of a study undertaken by Mr Stuart Pearson as part of the Scots-Sydney University Masters of Education Leadership Program. The study looked at the factors that influence men’s decision to teach and found that the male teachers at Scots possess a strong intrinsic desire to work with and guide young people, and that the influence of extrinsic factors such as pay and holidays was very small.

The culmination of the study was a number of recommendations to support existing male teachers. It also examined how the College might attract male teachers and to encourage our graduates to become part of “… the profession that teaches all other professions”.

Mr Pearson’s study has now been published as Issue 3 in the Scots Research Papers Series, and can be read in full here.

Why aren't boys reading as well as girls? And what can be done to counter underachievement? In response to the widely-documented 'boys' literacy crisis' and the gender gap revealed in Year 5 NAPLAN and PISA results, Scots Prep teacher Ms Donna Procter set out to tackle such questions. As part of The Scots College University of Sydney Masters of Education (Leadership) Program, Ms Procter reviewed academic literature on the problems of boys' literacy and conducted a research project examining attitudes to reading and testing a variety of classroom literacy strategies.

Ms Procter identified four factors influencing boys' reading ability: genes, cultural perceptions of 'real' masculinity, socio-economic status, and school-based programs. Using a wide-ranging survey, focus groups and teacher interviews, she gained detailed insight into the reading habits of Year 5 boys. She found that only 15 per cent of students were reading with parents/caregivers at home, and only three per cent with a father or older male figure - a significant concern given how much research points to the need for boys to read aloud to an adult every night and see good reading habits modelled to them. Vocabulary, intonation and fluency are greatly enhanced when students regularly read and are read to at home.

Ms Procter reflects on the opportunities in teacher-parent collaboration and classroom creativity for boys to enjoy and excel in their reading:
"Poor performance is not inevitable … Parents and teachers can work together in outlining good habits and ways of getting boys excited about their reading. This isn't just about boys reading a novel; it's about encouraging critical and creative thinking skills, which is one of the main components of the new Australian Curriculum," said Ms Procter.The full report on Ms Procter's research project is published in the Scots Research Papers series, no. 2 (February 2014), which can be downloaded here. 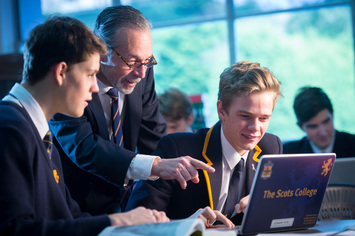 Mr Steve Stoneham, Dean of Language Arts, reflecting on Shakespeare with senior boys
Leading from the front, Mr Steven Stoneham, formerly Dean of Language Arts, ran an Action Research Project in early 2013 with his Year 10 English Honours class on the teaching of Shakespeare and published the results in a paper. The teaching method avoided the usual class reading of the play over many lessons. Instead, the boys began reading Katherina’s last speech at the end of The Taming of the Shrew. They were then emailed an electronic ‘program’ that asked them to focus on five sections of the play only. The story of the play between these sections was outlined. The intent was to engage the boys in thinking about a concept at the outset of their study of the play. They were to consider the play in relation to the idea of behaviour modification and its moral legitimacy.

As the boys read the selected sections of the play, they were challenged with questions. At the end of the five-week unit of work they had to produce an essay stating their case as to whether or not the ‘shrew’ had been ‘tamed’. Each boy answered a survey about the efficacy of the unit of work and the teaching strategy. Data crunching converted their answers to a finding. The teaching approach was found to have been overwhelmingly successful. The Action Research Paper was discussed in English Department meetings and has directed discussion about the most effective ways to teach Shakespeare at Scots.